After he’s injured in a terrible fire at an auto machine shop, Jose Vargas is forced to go on disability and leave his life as a firefighter behind – a task he finds incredibly difficult. Chief Boden tries to help a suspected teenage firebug. Also, Severide receives an enticing invitation from Renee, a woman who he saved from a car crash incident involving live electrical wires. Meanwhile, Cruz tries to save his younger brother Leon from the gang he is involved with. 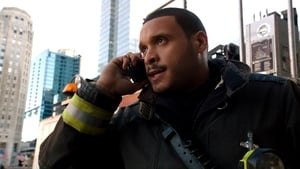